Behavioral gender differences are reinforced during the COVID-19 crisis Population-wide response to the COVID-19 crisis. The maps show the mobility (radius of gyration, RG) for cal- endar week (A) 10 and (B) 12 for Austria. The timeseries below outline the changes in (C) RG, (D) the call duration per call t, and (E) the number of calls per device Nc. During the lock-down mobility was drastically reduced throughout Austria. The call duration per call t increased dramatically and the number of calls, after a brief increase around the beginning of the lock-down, dropped below the pre-lock-down level.

Behavioral gender differences are known to exist for a wide range of human activities including the way people communicate, move, provision themselves, or organize leisure activities. Using mobile phone data from 1.2 million devices in Austria (15% of the population) across the first phase of the COVID-19 crisis, we quantify gender-specific patterns of communication intensity, mobility, and circadian rhythms. We show the resilience of behavioral patterns with respect to the shock imposed by a strict nation-wide lock-down that Austria experienced in the beginning of the crisis with severe implications on public and private life. We find drastic differences in gender-specific responses during the different phases of the pandemic. After the lock-down gender differences in mobility and communication patterns increased massively, while sleeping patterns and circadian rhythms tend to synchronize. In particular, women had fewer but longer phone calls than men during the lock-down. Mobility declined massively for both genders, however, women tend to restrict their movement stronger than men. Women showed a stronger tendency to avoid shopping centers and more men frequented recreational areas. After the lock-down, males returned back to normal quicker than women; young age-cohorts return much quicker. Differences are driven by the young and adolescent population. An age stratification highlights the role of retirement on behavioral differences. We find that the length of a day of men and women is reduced by one hour. We discuss the findings in the light of gender-specific coping strategies in response to stress and crisis. 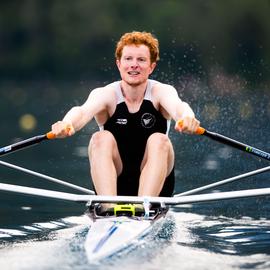